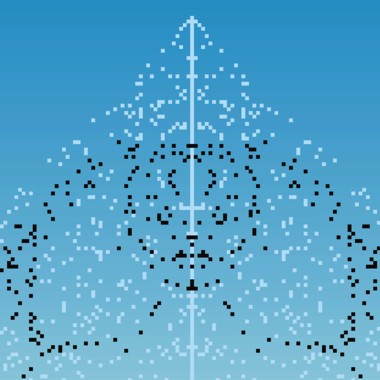 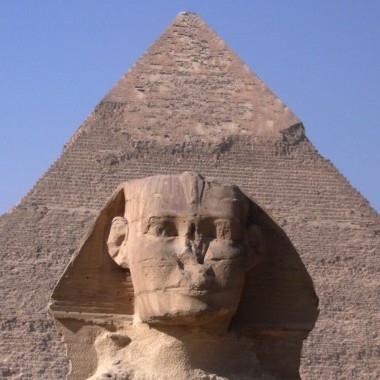 What an affinity! So anew the question: „Is this affinity by chance or was it on purpose of the pyramides architects – or by the spirit pushing them?“ – The first picture is showing a numeric design demonstrating the symmetric digits (black and lightblue dots) of the ciclenumber pi within the pi-ramid. The second picture is showing the sphinx in front of the great pyramid of cheops in egypt – considered as one of the 7 wonders and most heaviest buildings of the world.

You´d think: If the affinity of those pictures is by chance – this really would be an enormous astonishing chance.  But if this affinity was done on purpose – so this message could be destined for us now – living in a computer based world of high technology.

Can we insist on believing and teaching that a just neolithic age escaped nation has done this magnum opus just to build a dignified gravesite for their king? Is this authentic? – Who should have done the calculation, the organisation, the plans, the statics and evaluations, the planing of providing, the budget, the required politics and feasibility plans for such a huge project?- The masterplan itself? Who was able to enthuse the egyptian nation such a way so it realized that mammoth project? Or was mankind of that age not as far away from us today regarding intelligence? Between mankind of the Late Middle Ages and us today are just 600 years. And technical inventions like cars, planes, rockets, nuclear bombs or computers just have been made in a very short period of time.

Which technique they had applied? Has this technique got lost? Has it been washed away – washed overboard? Or is the whole story complete different and something else has had a finger in the pie we´re not able to realize yet?