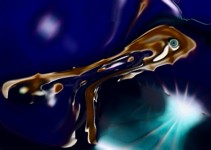 I´m dreaming. The battle was over – our enemy was beaten. Murei and Seli laying next to me didn´t say any word. But we couldn´t sleep. Our nation had used the most terrible weapon to ward the aggressors off. Round us just was horror. We did act in selfe-defense  to parry the evil – but now our nation was lost. The weapon had operated as unimaginable terrible so by now we felt the impact. Our continent was doomed. How much time would be til the continent  will sink to the sea ground – just a few hours, days or weeks? Looking in the face of eachone you knew: this is the question not pronounced. All around you saw the ground in motion and nobody would be able to keep it afloat. The continent will sink.

The next mornimg they called all survivors in each city to the great places. They organized the census. we knew what this would mean. Our wise men would choose peoples who would have to carry out the red plan. The red plan was already certain long before the weapon had been used – everybody knew this fact – but all hoped never to be in need of it. It had been developed for the worst case. Now it would happen any moment.

Murei and I got a green card – now it was the time to say goodbye. Seli cried. We cried, too. We would meet again in the afterworld. Seli will be there soon. She will sink with our loved home – Murei and me was given half a life yet. If all would work. And so we boarded our ships and joined to the others destined for the building  of a memorial for all future nations. Our wise men sent us to the north-east of that great wild continent laying outside of the danger zone. There we should build that huge sign and start up a new civilisation. God speed us! Leaving our love ones my wrench hurts me as much, so much – and now I´m awaking and recognize that I´m resting on the back of a magic dragon which had carried me through the times. And I realized that I have dreamed…